Review Of Amazon Original Series – The Man In The High Castle Amazon Prime Videos is a great way to stream movies and TV series (check out our top-rated series) for free, when you sign up for a 30-day free trial. In this article, we will deliver a complete breakdown and review of Amazon’s new hottest original series – The Man In The High Castle. The entire season is available for free on Amazon Prime Video!

This alternate history series, based (very loosely) on the classic 1962 Phillip K. Dick novel, takes ages to get going, spending roughly the first half of its season spinning its wheels with lacklustre character development and storytelling.

But around episode six, things shift, and the season begins to come alive. By the end of its finale, this is legitimately one of the weirdest things on television, a show that takes questions of just what evils we’re willing to be complicit in when living in any society, then gives them a sci-fi coating that makes them go down a little more easily.

On one level, yes, this is a show about a juicy alt-history premise that involves the Axis winning World War II and Japan and Germany dividing a newly occupied United States between themselves, with a neutral zone in the middle.

But dig a little deeper (especially in that second half), and this becomes a series about how living under an oppressive government doesn’t mean much if you’re not being actively oppressed and about how there’s an immutable, unchangeable nature to history itself. Even with completely different victors in World War II, this universe has a Cold War, of sorts, and it even has its own riff on the John F. Kennedy assassination.

The most chilling thing about the series, then, isn’t how different it is, but how similar. Its sixth episode, involving a long, lazy holiday get-together, features a man dressed in full Nazi regalia cutting up a turkey in a rough mirror image of Norman Rockwell’s “Freedom from Want” painting. It’s not quite subversive — it’s trying a little too hard for that — but it is deeply fascinating.

Here, then, are the good, bad, and weird things about The Man in the High Castle. And be forewarned: Spoilers follow.

Often, when praising a show for its production design, the critic is really trying to find something nice to say about a project that’s visually stunning but dramatically inert. And in the early going, Man in the High Castle often fits that description, struggling to have its storytelling achieve liftoff while the sets, costumes, cinematography, and other elements are evocative and eye-catching.

But even when the story picks up the pace, the series is still worth savoring for just how gorgeous it looks. Showrunner Frank Spotnitz and his team have really thought through what an alternate United States ruled by the Germans and Japanese would look like, down to seemingly the smallest of details.

So if this seems like a backhanded compliment, let the “compliment” part of that equation stand out as much as possible. This is the kind of show you can pause and examine in detail. Every frame drips with little Easter eggs and interesting bits and pieces, like a young German boy reading a magazine called Ranger Reich. Just looking at this thing will carry you through the dull bits.

The bulk of the first several episodes is set in a place called Canon City, which used to be in Colorado and is now in “the neutral zone,” the unincorporated territory between the American Reich on the East and the Pacific States on the West.

It’s here that the series’ two main characters — Juliana Crain (Alexa Davalos), who’s trying to figure out exactly what her newly deceased sister was wrapped up in, and Joe Blake (Luke Kleintank), a Nazi double agent posing as a resistance fighter — hole up while on a mission to deliver a filmstrip depicting a reality where the Allies won World War II (or, in other words, our reality) to the mysterious “Man in the High Castle.”

There are some okay moments here and there, particularly in the very first reveal of Joe’s true allegiance, but the Canon City material is quite a bit weaker than the show’s other storylines, and it gobbles up far too much of the early going. One of the big reasons for this? Davalos and Kleintank are fine, but most of the show’s other actors and characters are more instantly compelling. Thus, any time spent with the two of them together in Canon City feels like a time-suck.

It’s probably no accident that the series immediately starts to get more compelling when Juliana and Joe leave Canon City and head back to their hometowns of San Francisco (occupied by Japan) and New York City (occupied by Germany), respectively. Both of these settings are filled with far more intrigue than Canon City.

San Francisco, for instance, features Juliana’s boyfriend Frank (Rupert Evans), who’s trying to hide the fact that his family tree includes Jewish ancestry. (The Japanese don’t prosecute this as heavily as the Nazis do, but they’ll still do so if it fits their own ends, and open practice of Judaism is forbidden.) When Juliana disappears (to Canon City) in the wake of her sister’s death, Frank is hauled in for questioning, and he becomes a political radical thanks to his treatment by the state.

San Francisco also features the series’ intriguing subplot about the Japanese presence in the Pacific States, primarily filtered through a Trade Minister named Tagomi (played by the great character actor Cary-Hiroyuki Tagawa). The story involves both an assassination attempt and frantic efforts to prevent a nuclear war with Germany, two stories that have far more juice than the Canon City material.

Similarly, New York City features plenty of Nazi intrigue but also the series’ best single character in Rufus Sewell’s John Smith, a high-ranking Nazi official who, nonetheless, feels like he could be the hero of any number of other cable dramas, with many of the same positive and negative traits those characters have (including an inspiring personal back-story and a predilection for sadism).

In both of these settings, the series is able to dig into its most compelling material, which suggests the line between fascism and democracy is not as hard and fast as one might imagine, particularly for someone in a position of comfort and privilege, who will enjoy many of the same amenities under both systems.

The novel the series is based on was never going to be 100 percent faithfully adapted for television. It’s so slim it might have trouble supporting a two-hour movie, much less an ongoing series.

But that novel had a weird, mysterious tone that the series occasionally tries to bring to the screen, then mostly abandons as time goes by. In the novel, The Grasshopper Lies Heavy, is a novel imagining an alternate history that’s very much like our reality but not quite. In this series, it’s a bunch of filmstrips that point directly to our world, essentially. In the novel, The Man in the High Castle is a deeply held secret. In this series, he ultimately has an identity, or seems to, at least.

The I Ching, a Chinese divination method, recurs over and over again throughout the book, seeming to echo events in the story. And while that has a presence in this series, it’s mostly been sidelined. Maybe that was necessary to turn such an unusual and strange novel into a TV show, but it still feels a little like a perfect exemplar of what hurts the program from time to time.

Good: The series’ complicated approach to living in an unjust or immoral society 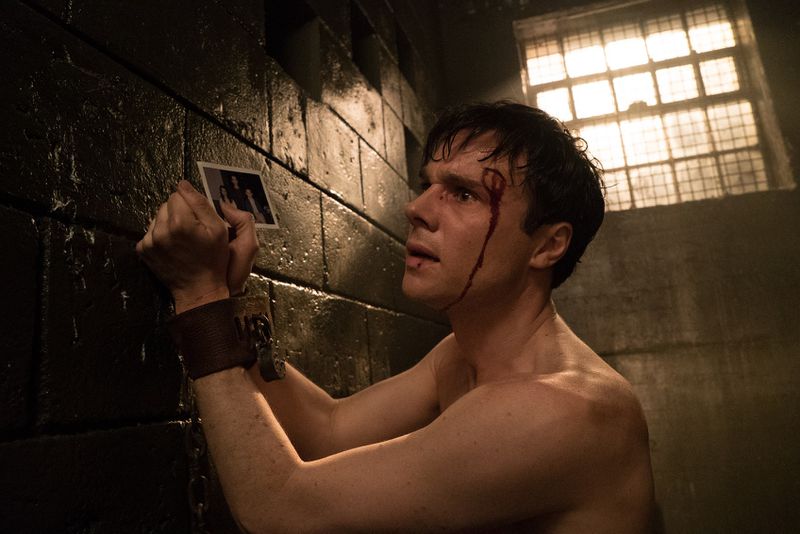 Frank is radicalized by his captivity, realizing how unjust the society he lives in truly is.

The most notable thing about High Castle is that the resistance has been all but crushed. (In the book, there isn’t really a resistance to speak of.) There are still a few people fighting back against the Nazis and Japanese, but they’re marginalized, and it’s only a matter of time before they’re wiped out entirely.

It’s natural to assume that the series will transition to a scenario where the characters join the resistance and attempt to stop the Nazi menace or something. But it doesn’t really do this. It knows that these things can’t be overcome so easily, and it gives the resistance very little hope. Instead, it becomes a way for the characters (most of whom have spent most of their lives or completely grown up in a world where the US is a distant memory) to realize just how corrupt and awful their society is.

And of course we in the audience, who know of the horrors the Nazis perpetrated, are nodding right along. We notice how, say, the fact that essentially everyone is either white or Japanese nods toward how widespread the Holocaust became when the Nazis finally won (notably, the only major black characters live in the Neutral Zone) or the fact that Judaism has had to go deep underground to stay alive, even in lands controlled by Japan.

But the series’ greatest masterstroke is that the vast majority of its characters, including our heroes, don’t really seem to care about the evils being done right under their noses until they’re forcibly confronted with said evils. High Castle forces viewers to see what’s human in Nazis, right down to Adolf Hitler himself.

In so doing, it suggests that all of us live in societies where we find at least something, no matter how small, completely unacceptable. And yet we do nothing, because it is more comfortable to stay put. This is the series’ deepest, richest theme, and when the material supports it, it pushes the show into another realm entirely.

Weird: The finale revolves around a plot to assassinate Hitler where you’re rooting for him to survive

If he doesn’t, then nuclear war will break out and wipe all the characters from the face of the Earth!

And then, in even crazier fashion, the show actually lets viewers meet an aged Hitler. And he turns out to be a massively important character who should have huge bearing on seasons to come. It’s completely gonzo, kind of brilliant, and utterly fascinating.

I’m not going to spoil it here, but man alive, I don’t even know how the show comes back from that one.

If you enjoyed this review and find yourself itching to give this Amazon original a shot, sign up for the free trial and gain access to not just The Man In The High Castle, but also to over 17, 000 movies and 1, 800 series. Sign up now!